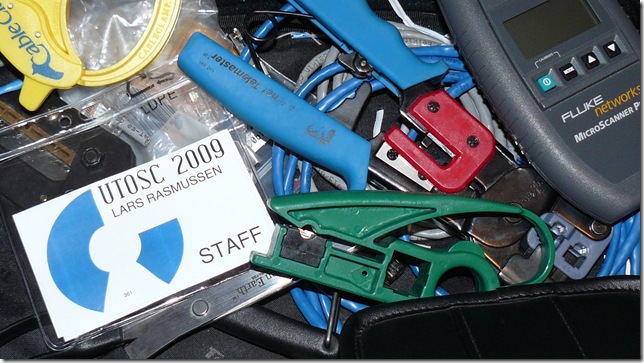 Last Wednesday night I went to the Miller Free Enterprise Center on the Sandy Campus of Salt Lake City Community College to help set up for UTOSC 2009 – this year’s Utah Open Source Conference.  My first marching orders from a seasoned network admin were to cut and crimp some cables for the exhibitor booths/tables.  Turns out there is a best way to tape cords and cables to the floor, and it involves a specific kind of tape that techs who accompany concert tours and assemble movie sets use: it’s called gaffer’s tape.  Gaffer’s tape tears like cloth tape, but is much stronger, and unlike duct tape, leaves no adhesive residue behind when removed.  After false starts at Home Depot & Graybar, I purchased a 60yd roll for $20(after taxes) at the local Guitar Center.  Usually it comes in matte black as to not reflect any light, but the roll I purchased was white for high visibility(cords are a trip hazard, even when taped down).  Cheap imitations of gaffer’s tape exitst, but if you paid less than $15 a roll it was likely not the kind of tape a gaffer on a film crew would use.  Graybar sold me something similar called Electrician’s Bundling Tape, but it didn’t tear nearly as well, and cost around $7 per roll.

Mounting tape was another adhesive used in conference setup.  I needed to tape an additional Cisco wireless access point(conference attendees were saturating the wireless spectrum with their array of RF devices – I think we added 4 APs to the venue) to a glass window, and this mounting tape worked so well I wonder how somebody managed to remove the equipment afterward.  A $500 radio within arm’s reach might be in danger of being stolen, and any safeguard preventing a casual thief from walking away with this hardware seemed a judicious choice.

Next year I want to be able to attend more presentations, so in the future think I’ll limit my volunteer efforts to the night before the event.  Presenters were very technically oriented, and the raw knowledge disseminated more than made up for an occasional lack of salesman-like polish in delivery.  As a geek I appreciate more substance and passion than hollow style.  When a fellow geek noticed I was running Windows 7 on my laptop and quipped regarding the same, a guy I didn’t know across the table from me shot back, “Open Source is more than Linux”.

UTOSC speakers had a focus on automation and uptime – the theme of the conference was (afford | scal | reli)ability.  Another attendee remarked at dinner that in his experience, *nix admins tended to focus more on automation of processes than their Windows counterparts.  Or as another presenter, Christer Edwards, put it, “A good admin is a lazy admin.”  I agree.  Next year I’m going to offer to present on automating processes within - you guessed it – Windows.

Next year I want to be able to attend more presentations, so in the future think I’ll limit my volunteer efforts to the night before the event.

How about I meet you half way, next year you can be involved in pre-event setup and we will limit you to Pre event and Post event. So you can be attend more presentations without interruption.

I really missed having you on Saturday, you are one of the best Lars.

It's a deal! I'll be on the lookout for the next UTOSC dates to schedule the time off in 2010.