Download purchased MP3s from Amazon more than one time? Not without intervention from tech support.

I began trying Amazon's MP3 download service recently, and was initially pleased with the results. After purchasing a track I could visit the 'Your Media Library' section of the site and download my previous purchases, even if I was at another computer.

Amazon will let me pay for the same track twice(albeit with a recently added warning), but there is no longer an option on the site to "redownload" tracks already purchased, _unless_ you contact Amazon's technical support. The following video screenshot displays the warning without any option to download content previously purchased. 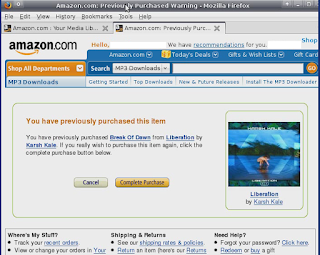 This is further complicated by a lacking website implementation of the Amazon MP3 Downloader application, which only works if the Amazon MP3 site sends an 'AMZ' file to download cover art and create Artist\Album folder directory trees. If the site sends you an MP3 file instead of an AMZ, you get the pleasure of creating your Artist\Album folder directory trees manually!

Should you choose to cancel the download after purchasing, the site will not let you try to download the track again unless Customer support triggers a magic bit. And should you receive an MP3 file download prompt instead of an AMZ file that works with the Amazon MP3 Downloader, the whole cycle repeats itself.

At the very least Amazon could allow users an option to default to downloading AMZ files instead of a manual MP3 download.

This also means accessing your purchased tracks on another computer is no longer a feature. It's been recently yanked.

Amazon was pretty quick to respond to my inquiry, but could they do more?
Here's the text of their response:

Amazon MP3 files are only available for download at the time of purchase. We display information about the items you've purchased from the Amazon MP3 Music Downloads store in Your Media Library so you can keep track of what you've bought and discover similar items that may be available. However, the files are not stored there and cannot be downloaded again after purchase without intervention from Amazon MP3 Support on an exceptional basis. This has always been the case with our downloads.

Because you can only download an MP3 file once upon purchase, we encourage you to make back-up copies of your MP3 Music files to ensure you will always have access.
[info about browser/cookie config removed]

Amazon claims this functionality has never been available. Methinks it has been removed in the last month, because I was able to download tracks more than once that I had purchased via the 'Your Media Library' without contacting support.

Amazon could do more to ensure that their customers receive the digital media purchased. Amazon's customer service has been handled well in other areas... why put the burden on the consumer, when the site can allow multiple downloads of previously purchased content?

Is this a digital iteration of forcing consumers to buy media more than once, similar to moves from VHS to DVD to Blu-Ray?

Nope. It's worse. In this case the consumer's second purchase does not include any additional value. The burdens of data integrity and recoverability are placed upon the consumer. Don't be concerned, because Amazon has a service that can be used for backups, too.
Posted by Lars Rasmussen at 8/16/2008 03:00:00 PM

It comes down to the question of what services is Amazon providing you for your $.99. I've only purchased one mp3 from them and it was a while ago, but I do distinctly remember reading that they provide you the opportunity to download the track just the one time. How much more upfront can they be?

I imagine their reasoning revolves around the cost of operating the service. Bandwidth costs are real and if everybody downloads every track twice, that's double the bandwidth used. That's going to be reflected in the price of the song.

But the real bottom line is that the terms and conditions are spelled out in not too difficult terms. So if you don't like the way they operate, I'd say you should take your buck somewhere else. The good news is that since your already purchased tracks are mp3s, at least they won't ever expire.

tensai, well said points. I am paying to not be encumbered by a DRM scheme. Are my expectations too high?

Amazon could do more. At the very least, there could be an option to force AMZ files to be downloaded, and that would clear up a lot of my complaints, because a proper download of the MP3 tracks would then occur more often the _first_ time.

If it were really about bandwidth costs, then I would gladly pay the bandwidth fee to download the song again. How much of that $.99 goes to bandwidth? I'm guessing probably $.01 or so. I'd gladly pay a penny a song to redownload them after a HDD crash.

I'd also be willing to pay an additional fee if the issue was bandwidth costs.

Just got bitten by this. Smartphone got stolen and the < $100 MP3 that I brought from Amazon MP3 Store on my Android Phone? Touch Shit?

I'm going [back] to Zune Pass.

I'd contact Amazon MP3 Support immediately and see if they'll make an exception for your previously purchased tracks. If support helps you out, please post back here. As much as I dislike the design of the service I've still been impressed with Amazon's customer/technical support team. Give it a go - it's a good opportunity for Amazon to make lemonade out of your bitter experience and have it indexed by search engines.

Amazon online. com could do more. At the very least, there could be an choice to power AMZ information to be downloadable, and that would obvious up a lot of my problems, because a appropriate obtain of the MP3 paths would then happen more often the _first_ time.