I launched an XP VM instance this morning in VMware Server after a recent testing install, and proceeded to update the computer. After installing Windows Genuine Advantage, I received the following advertisement on my screen, courtesy of Microsoft: 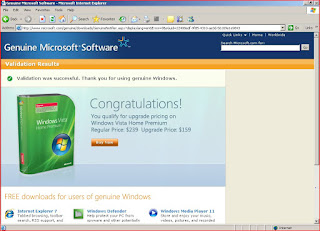 It appears that Windows Genuine Advantage - the component that is supposed to fight piracy - also doubles as Microsoft-branded adware. Nobody likes adware, especially the sneaky kind. Yech.
Posted by Lars Rasmussen at 3/26/2007 03:59:00 AM

How can we deal with this problem please? Certainly I like many others use the IE7 update feature several times and have to download that "genuine tool" sort of...

Thanks for the precaution,
Karl Sultana

Karl, the Automatic Updates feature in XP allows updates to be downloaded without WGA, but allows less control over what's being downloaded. The Automatic Updates option in System Properties has the option "Download updates for me, but let me choose when to install them" - that can help. I sometimes enable Automatic Updates when setting up a PC for the first time & turn them off later. If you are deploying machines a WGA addon can be integrated into an unattended install - kind of an OEM approach to include WGA before the machine is delivered to the enduser and/or without an internet connection. Use good judgement as a legal licensed owner of the OS - a hacked WGA implementation could be used for illegal purposes. Another option is to manage updates in-house by deploying/pushing updates/hotfixes over the network to client PCs - that way you don't need to ask Microsoft's permission to take care of your infrastructure in the way you see fit.